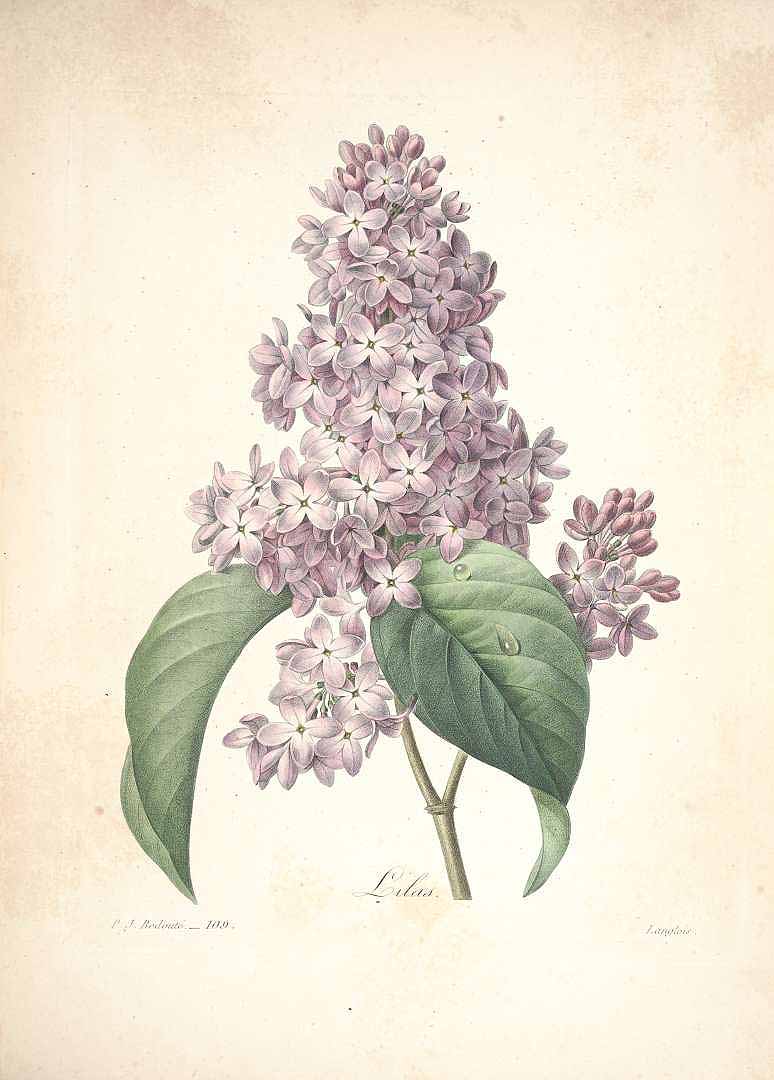 Cut, lilacs last about three days. On the bush, they last a few weeks, but after ten days or so the flowers start to go subtle brown. They bloom so briefly, every spring, marking the end of winter and suggesting summer is still a ways off. Perhaps this brevity explains why I have been trying, all my life, to get lilacs into a poem. But even now, drooping there on the table, they resist my page.

In America, poets have been writing about lilacs since they were transplanted here. When Walt Whitman first published his elegy for Abraham Lincoln, “When Lilacs Last in the Dooryard Bloom’d” in 1865, the common lilac had only been growing in the American colonies for a little over a century.

The common lilac, or syringa vulgaris, was brought over from Eastern Europe, and first planted on the grounds of Governor Benning Wentworth’s estate in Portsmouth, New Hampshire, around 1750. The Wentworths likely chose this cultivar because of its hardy nature—the syringa vulgaris is drought resistant, and requires relatively little care to produce abundant flowers in the spring. It is non-invasive, so can be largely ignored, though left entirely to its own devices, the lilac can grow quite tall and tree-like, and start blooming at its peak, putting its flowers well out of reach. A well-tended lilac will bloom at eye level. The lilac has a markedly brief blooming season of about two weeks. Once bloomed, the buds seem to decline toward brown the moment they open.

Lilac blooms have a distinctive color. Though there are now more than twenty cultivars in gardens across North America, the most popular varieties are purple, either deep or pastel, with flowers set dramatically against a profusion of glossy green heart-shaped leaves and woody branches. The syringa vulgaris produces flowers in pale violet, a cool toned light purple hue. Smelling of these purple blooms, what Whitman calls that “perfume strong I love,” fills the senses with a scent both pervasive and elusive, powdery and sweet. Once the blooms have passed, though, a lilac bush is not particularly distinct.

In the century since Whitman’s invocation of this woody flowering bush, the lilac has been added to the stacks of symbols American poetry keeps in her closets. Perhaps because Whitman used them elegiacally, to plant a lilac in a poem is often to point to a speaker in mourning. Lilacs provide the poem an infusion of ready-made nostalgia, and like a floral perfume that goes powdery on the skin, lilacs in a poem can easily go stuffy or cliché, too-warm embrace of an overly familiar embrace with a relative, with whom you are not close.

Time and lilacs grow close together. Inserting a lilac into a poem locates us in time. If there is a blooming lilac, we are in late April or late May. The lilac also provides a sense of urgency. If the lilac is in bloom, then time is passing quickly, or will soon pass. The lilac anticipates its own passing, so the symbol of the lilac does the same work in a poem. Poets frequently double down on this symbolism, placing the lilac in dusky twilight, the transition from daylight to night that is so hard to discern exactly, that you know more certainly after it passes.

Take, for example, the first stanza of “When Lilacs Last in the Dooryard Bloom’d”:

When lilacs last in the dooryard bloom’d,

And the great star early droop’d in the western sky in the night,

These lilacs, well established enough to bloom, are a yearly expectation of return and renewal, even as they anticipate their own decay. Whitman goes on:

Ever-returning spring, trinity sure to me you bring,

Lilac blooming perennial and drooping star in the west,

And thought of him I love.

The return of the lilacs provides a certainty of rebirth, but this natural rebirth and return causes the speaker’s mind to turn to grief and death. Lincoln, dead, will not return in the spring as the lilac bush does. Throughout the poem is the idea of the “ever-returning spring” – that returns the same for flowers but not for people and not for a nation – that haunts the speaker.

The lilac’s impermanence provides symbolic weight to poems about loss. In Ann Stanford’s “Done With,” the lilac offers way toward mourning the destruction of her family home:

They are trampling the garden–

My mother’s lilac, my father’s grapevine,

The freesias, the jonquils, the grasses.

Through the workings of time and of commerce, Stanford’s family home is dismantled, the plot paved over. This work erases the trace of her mother’s home, but also trespasses over the flowers her mother once cultivated. Stanford mourns the destruction of the house itself, but more so mourns the lack of return. The recursive potential of the lilac is covered over in concrete:

What will they do in springtime

Those bulbs and stems groping upward

That drown in earth under the paving,

Thick with sap, pale in the dark

As they try the unrolling of green.

In the other direction, the poet Phillip Levine, disturbed by the lilac that blooms when other things die, writes in “Burial Rites”:

beside a young lilac that’s now

taller than I, and stuck the stub

of a rosebush into her dirt,

The lilac comes back undisturbed by death; it thrives despite the loss. The profusion of flowers decay and return without the attachment of grief. The lilac does not know anything has been lost. In each of these examples, Whitman, Stanford, and Levine, the symbolic weight of the lilac depends on its return.

In bloom, the knowledge of the lilac’s brief season suggests the brevity of life itself. If rent out, the loss of the lilac bush suggests something gone too soon—the interruption of renewal. And what is death but the end of reiteration? The lost potential that what once bloomed perennial will not return?

But our symbolic register begins to fail when the plants themselves die. At the Wenworth-Coolidge estate in Portsmouth, New Hampshire, the oldest lilacs in America are sick. Their sickness has a sweet name: “honey fungus,” but they are dying. The fungus rots their root, and there is no cure. The sick bushes must be pulled out of the earth, removed from the garden.

I can get the tree out, said the man from the gardening service as he surveyed my bush, but it’ll take a while for the lilac to come back.

It was early spring. The lilac bush was under the window of my writing room, a little yellow-painted corner room not suited for much more than a small chair and a desk. In that room, I wrote my notes for poems, and spent long hours looking at the lake, anticipating the lilac. It was from that window that I first noticed the tree.

Crab apples like to grow in lilac bushes, the gardener told me, since the dense branches of the lilac provide a safe space to grow. Eventually the tree’ll take over though, he continued, and to get the crab apple out he’d have to take the lilac down to the ground. Since lilacs bloom on old wood, it would not bloom again for a year or more.

While Whitman’s speaker assures himself that the lilac will return, “blooming perennial,” there are actually several ways to prevent a lilac to from blooming—cutting it back is one. Same for replanting, relocating, or over fertilizing. Taking a lilac down to the ground will keep it from blooming, but when it comes back it will droop with blooms.

In the end, I decided not to pay to have the crab apple tree pulled out, or the lilac tended to. I cut the blooms that did come, and put them on my desk beside the stacks of notes, the poems waiting.

In the myth from which the lilac’s genus name is derived, the nymph Syrinx flees from Pan’s pursuit, and in her flight is transformed into a bunch of hollow reeds. Coming upon the reeds, Pan cuts them down, carves them, and uses those reeds which were lately Syrnix’s body, to blow a tune through the hollow center. Syrinx’s body is dismantled, used in performance by the lover she sought to avoid.

“Lilac wine, I feel unready for my love,” sings Nina Simone, trying to delay the loss of something already gone.

It is unclear how the myth of Syrinx came to name the lilac, and though some modern reinterpretations have recast her transformation from reeds to becoming a lilac bush, the applicability of this myth to the lilac is questionable. Lilac branches are not hollow, and it would take some doing to turn lilac wood into a pan flute.

The carved-out branches may not yield an instrument, but the center of a lilac branch can sometimes contain another art: a streak of lavender, painted within. The wood holds not only the color, but the fragrance of the flower, and wood carvers who work with lilac wood remark on the scent that fills the room as they work. The failed poet who narrates Nicholson Baker’s novel The Anthologist puts it this way: “[it’s] as if [the lilac wood] soaks some of the purpleness of the blossoms back into itself when they go” (200).

This inner streak, the suggestion of recuperation of decay back into the body, might account for the recuperative turn of the lilac in Danez Smith’s brief lyric, “Little prayer”:

Let him enter the lion’s cage

& find a field of lilacs

let this be the healing

Smith’s field of lilacs remind me that the bush must be cultivated. It will not bloom well without tending. 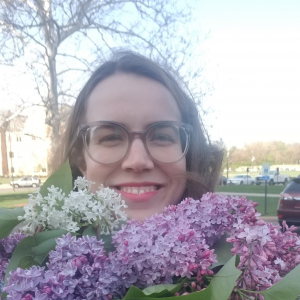 SARA JUDY is from the prairie. She is currently an English PhD and poetry MFA student at the University of Notre Dame, where she studies 20th and 21st century poetry and poetics. Her creative work has recently appeared in Bluestem and The Midwest Review. Sara also serves as an assistant book editor for Religion & Literature, and as an editorial assistant for the Notre Dame Review.