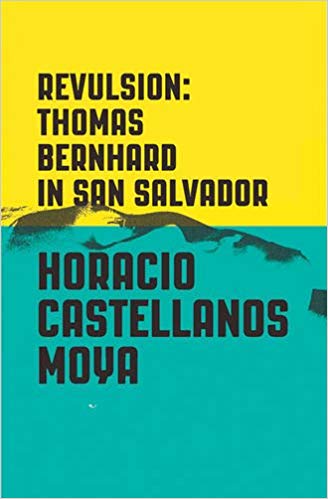 I first came across Castellanos Moya’s work when my father, who lives in El Salvador, gifted me with El Asco/Revulsion. “Just know,” my father said at the time, “That this work is suspect, many people here are opposed to it.” I devoured the 119 pages, each dripping with genius and acerbic humor. I loved every word and could see by book’s end how it was possible that in El Salvador the author and his book had become persona non grata and an abomination respectively.

Castellanos Moya survived the maelstrom his book caused (including the death threats) and is now Associate Professor in the Spanish Creative Writing MFA program at the University of Iowa. I reached him in Stockholm where he was spending time this summer; we spoke in Spanish and English.

Claudia Castro Luna: El Salvador is back in international news, this time as one of the countries whose citizens are fleeing horrible violence, desperately seeking asylum in the United Sates. Your books engage with characters that are, in one way or another, besieged by the violence they endured or inflicted on others in El Salvador. Would you say that violence is a protagonist in your books?

Horacio Castellanos Moya: It is interesting that you ask this question—I have been reading a book soon to be published by Knut Walter who, after examining El Salvador’s historical record, has found that the country withstood almost the same level of violence as percentage of the population in 1912 as it does today. The rate of killing in 1912 was 112%, very close to the current levels. One could say that all these years El Salvador has endured an epidemic of killing.

With respect to my characters I try to recreate ways of thinking and moving, a way of being that comes as a result of being in a circle of violence. I work to locate this violence, to imagine the way characters feel trapped. I write about what it is like to have no light at the end of the tunnel.

CCL: If one could speak of a literary obsession, what would that be for you? What is the idea, concept, or feeling that you strive to flesh out in your writing?

HCM: The backbone of my work is the fact of being Salvadoran—the reality of a person who comes from that country. My characters are not bound by the geography of El Salvador, they don’t live there, they can be in Mexico or Guatemala, but the authorial concern is explaining the reality of someone who was affected by the war.  I’m interested in how memories of this country play out in the daily lives of these characters. I write characters whose personal lives are set against a landscape of convulsion. History and politics are important in that characters’ lives move against their backdrop, however I don’t think of my novels as sociological novels. Yet, the personal is of permanent concern to me.

CCL: Can you say more about what you call permanent concerns?

HCM: I guess there are two features that profile in my work: the first is exile—escaping, fleeing—as in Pérfil del Prófugo, my second book of short stories, which has never been translated and deals with the necessity of having to run away immediately from a place. The second concern is paranoia, that is to say fear. Not on the individual level but as a collective feeling, as a way of surviving. Fear as a way of life.

HCM: Paranoia and the desire to escape are emblematic of many of my characters. There are some, of course, who do not register this frequency. The wish to escape is not a direct response to a particular place, or to particular images, rather a desire to abandon the place they inhabit, the conditions in which they find themselves, or simply to step out of their personal anguish.

CCL: How do you write exile on the body of your protagonists? How does being Salvadoran—that is to say, from a place marred by historical violence—manifest physically for your characters?

HCM: The protagonists who are assailed, gnawed, by their own bodies are very precise. In Moronga, my most recent novel, Erasmo Aragón, suffers from an acute nervous reaction; but this illness he had already twenty years earlier in the prequel, The Dream of my Return. Another example of the ways in which a character’s spirit manifests on the body is the case of Vikingo (in La sirvienta y el luchador) a former torturer who was a policeman who suffers from symptoms similar to stomach cancer. Or Alberto Aaragón, the ex-ambassador in Donde no estén ustedes who is victim of an alcoholism so profound it drives him to his death. Laura Rivera, the narrator and protagonist of The She-Devil in the Mirror also suffers from profound anxiety. I make no distinction between male and female characters on this front, both suffer from such ailments.

CCL: Is there a place in your novels that one could call fertile or its opposite, sterile?

HCM: It is difficult for me to speak of sterility or fecundity with respect to my work. Death is at the end of the road for the fertile and the barren. In this sense, history is barren. Something of that is reflected in my novels.

CCL: Going back to the opening question, the world is seeing unprecedented numbers of war refugees and people emigrating from the Southern Hemisphere toward northern countries because of war, famine, economic despair and environmental degradation. How do you interpret Salvadoran emigration in the last thirty years? Are Salvadorans still leaving for the same reasons they left in the 1980s during the Civil War?

HCM: I think escaping violence is a common thread running through the exodus of the 1980s and that of todays. But the emigration of the 1980s was of a political nature. It had to do with a military system that imposed extreme repression; it approximated a fascist state. There was a leftist opposition with its own ideology, of course, and regular people caught in the middle. In a way what happened in El Salvador was the Cold War playing out in a small country.

At that time there was an explanation for people fleeing and escaping. There was an ideological fight for control of political power. Now there are no political or ideological explanations for the massive exodus. Now there is killing for its own sake, killing by itself. There is a deterioration of social norms, a downgrading of social values. Now there is just robbing, just killing for no higher purpose, which stands in direct contrast to the 1980s when there was the hope of political change. Now we have a collapsed society where gangsters commit the cruelest crimes and control large amounts of money and terrorize every aspect of society. It is a very desperate situation. People want to escape this violence.

CCL: What sustains you?

HCM: I think this is a crucial question, because without having strong resistance and resilience we could not go on. Salvadorans, we are resilient, “You can do it” can be a sort of motto for us. Every day there are approximately three hundred Salvadorans leaving on foot to cross Guatemala and Mexico to find a better life. They know they can be raped, robbed, or killed. They know how difficult is and that the US administration is opposed to it. But they do it. They do it because they have the will to survive. They have a spirit of survival; there is a wheel of survival and of courage. It was like that during the War as well. Salvadorans have great courage to face difficulties and a great sense of humor as well. It has to be that way to offset the negativity and despair. 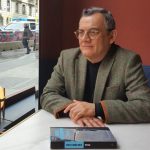 HORACIO CASTELLANOS MOYA is a writer from El Salvador. For two decades he worked as editor of news agencies, magazines and newspapers in Mexico, Guatemala and his own country. He has published twelve novels, five short story collections and two books of essays. His novels have been translated into thirteen languages; six of them (Tyrant Memory, Senselessness,The She-Devil in the Mirror, Dance with Snakes, Revulsion: Thomas Bernhard in El Salvador, and The Dream of My Return) are available in English. Currently he is associate professor in the Spanish Creative Writing MFA at the University of Iowa. 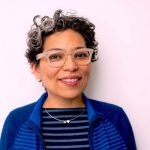 CLAUDIA CASTRO LUNA is Washington State Poet Laureate.She served as Seattle’s Civic Poet, from 2015-2017 and is the author of the Pushcart nominated Killing Marías (Two Sylvias Press) and This City (Floating Bridge Press), and the creator of  the acclaimed Seattle Poetic Grid. She is also a Hedgebrook and VONA alumna, a 2014 Jack Straw fellow, the recipient of a King County 4Culture grant and an individual artist grant from Seattle’s Office of Arts and Culture. Born in El Salvador she came to the United States in 1981. She has an MA in Urban Planning, a teaching certificate and an MFA in poetry. Her poems have appeared in Poetry Northwest, La Bloga, Dialogo and Psychological Perspectives among others. Her non-fiction work can be read in several anthologies, among them This Is The Place: Women Writing About Home (Seal Press). Claudia is currently working on a memoir, Like Water to Drink, about her experience escaping the civil war in El Salvador. Living in English and Spanish, she writes and teaches in Seattle where she gardens and keeps chickens with her husband and their three children. Since 2009, Claudia maintains Cipota bajo la Luna, a blog with reflections, writing and reviews.