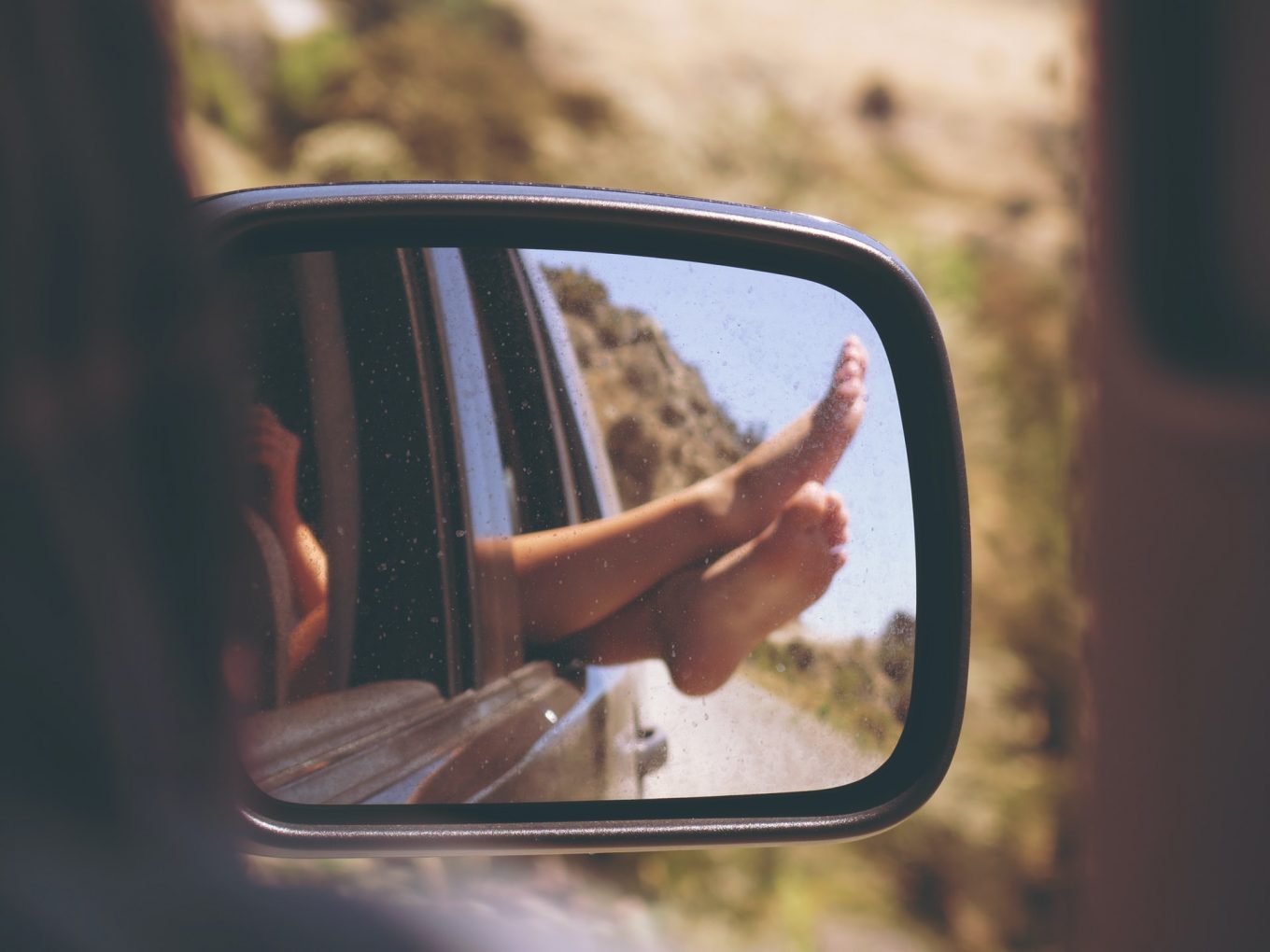 We have 40 miles to drive, and this is the back seat configuration: parent, adult child, parent. I duck my head and get in first. Mom squeezes in from the driver’s side, then Dad from the passenger’s side. My brother’s in the front seat and my boyfriend starts the car. We’ve concluded our visit to Kasteel de Haar in Utrecht, and it’s time to drive back to Leiden, the city I call home in the Netherlands. I’m squashed between my parents, who are visiting from Minnesota. We pull onto the highway entrance ramp and the car accelerates. Dad’s eyes close. One minute, he’s gazing out the window, taking in the scenery, and the next, he’s sleeping.

My dad has always had this uncanny ability to catnap anywhere and instantly. When I was growing up, he would come home from work, change out of his business attire into jeans and a long-sleeved button down. He’d get into bed on top of the covers. He would lie on his back, hands clasped together on top of his chest. Within moments he was sound asleep. I knew this because sometimes I would come in after he’d settled to ask him a question, and get no response other than a heavy exhalation. I would tiptoe out and wonder if he was faking it, or if he’d be out for the night. But like clockwork, thirty minutes later he was up and ready for dinner, hair slightly flattened on the back of his head.

It wasn’t just the post-work power nap. He fell asleep on the couch, either seated or reclined, watching football games, movies, or series. He fell asleep in armchairs during holiday celebrations, surrounded by family. He fell asleep on airplanes and sometimes in movie theaters. He doesn’t have a condition. It’s not narcolepsy, because he exercises full control over it. He never fell asleep at work, in church, or during dinner parties. When the urge struck him, and the moment was deemed appropriate, perhaps he thought “I’m tired,” and closed his eyes. I cannot do this. I am the sort of person who can be exhausted to the point of nausea, lie down in bed, and wait. Twenty minutes pass and I’m up again, frustrated with my racing brain. He just shuts his eyes and takes a deep breath.

A few minutes into our car journey back to Leiden, he’d done it again. I glance over at him and see his head resting on the window, his eyes closed and shaded behind sunglasses, lips slightly parted, hands joined in his lap. I smile to myself, and remember.

My mom leans forward, inspecting him, her eyes wide. She shifts closer to me and whispers in my ear. “I always check on him now, you know,” she says. “Just to make sure he’s still breathing.”

I look over at Dad. I look more closely this time, leaning forward into his space. He’s the same old dad I’ve seen for 40 years. Now he’s 80 and is often mistaken for a much younger man. His hair has thinned a bit, I’ll attest to that. It’s lighter, wispier. But his wrinkles haven’t deepened and his hair line has remained steady. Yet he’s older than the living members of the Beatles. Four years older than Paul McCartney. Two years older than Ringo Starr. He’s lived past life expectancy for US males: In 2016 men were expected to make it to 76.1 years.

I try to comprehend that. My dad has lived past life expectancy. I glance at him again, and just like that, the air conditioning feels too cold. I hug my arms and try to perceive the rise and fall of his chest. I contemplate pulling a small mirror out of my bag and placing it close to his nose, to watch the proof of his exhalations fog the glass. Then his arm moves slightly, and a split second later, my mom nudges me with her elbow. I look at her and she nods, eyebrows raised in affirmation. We both relax.

“He’s getting older, I can tell,” she says, keeping her voice low. I think about how Dad, just that afternoon, spent hours marching around the grounds of an aristocratic castle, jogging up and down narrow stone spiral staircases. I think about his workout routine, three to four days a week, and his weight, unchanged from before my birth. He recently decided he’s not retiring. Ever. On the weekends he races cars and wants the income to feed his hobby. He’s a race car driver, and now he’s sitting in the backseat of his daughter’s beau’s car, being driven around. Of course he’s going to take a nap.

I don’t look back at him, not for now. Watching someone sleep is an intimacy reserved for few, and I don’t feel comfortable at the thought of him opening his eyes and seeing me staring. Especially if he knew what I was thinking. Instead I look forward, through the windshield. The traffic is light on a Sunday afternoon, and the sun shines on, not a cloud in the sky.

My mom leans toward me again, and speaks in the same undertone. “I hope when he goes he goes like this.”

“Mom!” I say, trying to convey my horror in a whisper.

“I just don’t want him to suffer,” she says, her tone conversational. “It would be terrible for him to have a long illness. I want him to go like this.”

I contemplate the horror of my dad falling asleep and never waking up in the back of the car belonging to my boyfriend, a man my family had met for the first time two days earlier. I had created a detailed schedule for their visit, arranged tickets, car and train rides, even meals. Dad dying in the back of my partner’s car on the third day of their holiday was not part of the plan. Still, my itinerary planning mode finely tuned, I brainstorm the practicalities. The agonizing, tragic ride to the hospital, then the morgue. Repatriating Dad’s body from the Netherlands to the United States. My romantic partner being thrust into a familial intimacy far beyond fitting us all in his two-door car.

Mom bumps me again. “Remember Pete Maravich, the basketball player? He died of cardiac arrest while playing a game with his friends. Just like that, he was gone.” She snaps her fingers and I flinch. “That would be ideal.”

Oblivious to my discomfort, or exhilarated by it, my mom continues. “I check on him all the time, you know. Every night in bed. Every morning if I’m up before him. I just never know when it’s going to happen.” She sighs, and settles back into her seat, at peace with her perspective.

I shake my head. But I can’t know how she feels. She married him when she was 21 and he was nearly 33. My mom’s spent a lifetime being the much younger spouse, imagining the moment when he dies before her. She’s been preparing for this since before I was born. Besides, the last time she was in a car with him he was probably gunning it around a curve at 60 miles an hour, and now he’s out cold.

I peek over at him one more time, and breath in a defiant sort of relief. He’s the same Dad who can rejuvenate his body and mind at a moment’s notice. He looks peaceful, but it’s not the sort of peace that implies giving up. It’s the peace of someone who wants to experience the world for a long while longer, and who knows there’s no better way than to get a little shut-eye.