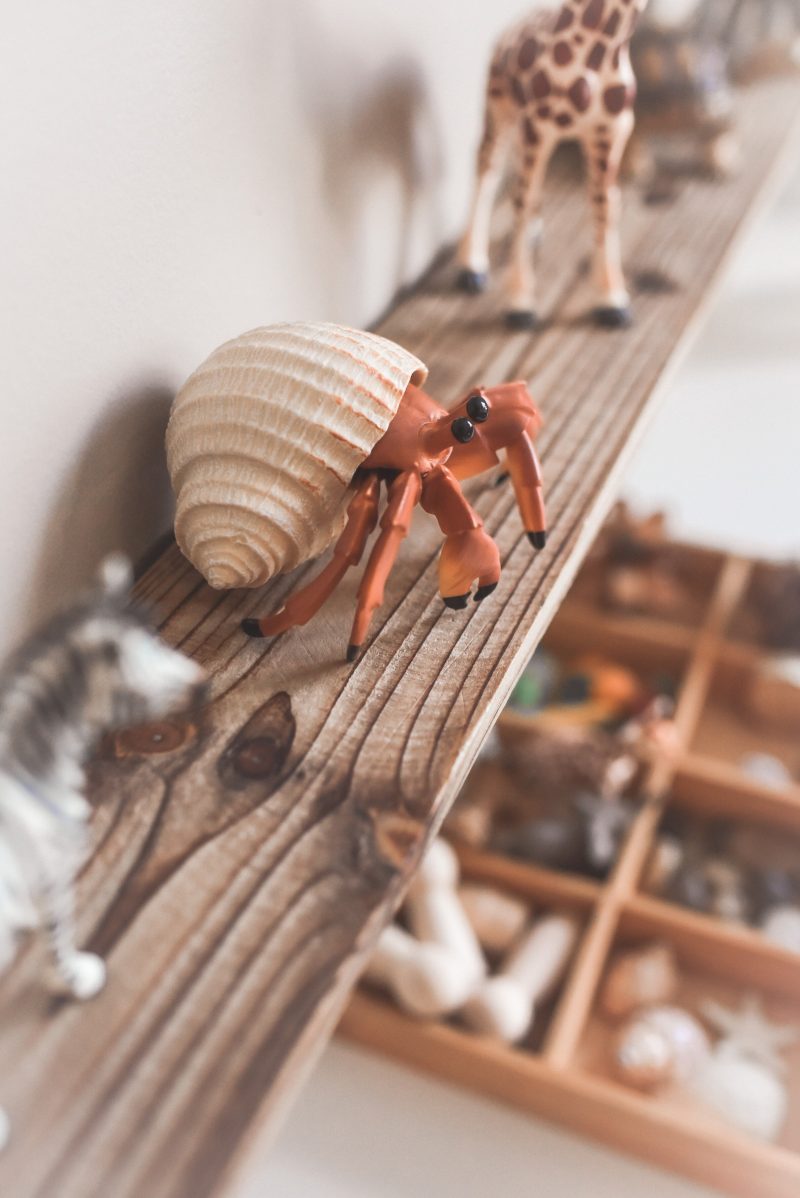 From the front a hermit crab looks like a hand, a red-fingered fist, curling out of a shell.

This seems an appropriate metaphor for a hermit crab essay.

According to Brenda Miller and Suzanne Paola in their craft book Tell It Slant: Writing and Shaping Creative Nonfiction, a hermit crab essay is one that “appropriates other forms” the way a hermit crab appropriates another’s shell.

Thus a hermit crab essay could be told in the form of a syllabus, drug facts, body wash, Google maps, footnotes, the pain scale, apologies.

Miller and Paola claim that the form, the “outer covering,” of a hermit crab essay, works to “protect its soft, vulnerable underbelly.” They claim that this kind of essay “deals with material that seems to have been born without its own carapace—material that’s soft, exposed, and tender and must look elsewhere to find the form that will best contain it.”

I wonder, though, if the shell provides containment more than protection, parameters more than safety. Like Robert Frost playing tennis with a net.

A shell can protect but it can also hold something that needs to be held—the plumule of a seed, the inside of an egg, the powder and shot of a shotgun shell. All these things are—eventually—meant to be released.

The hand emerges from the shell.

I wrote my first hermit crab essay by accident. I was on a residency at the wonderful Virginia Center for the Creative Arts and I was toying with the idea of writing about a forbidden crush in the form of a timeline—what would its mile markers be? how long would it take to subside? I didn’t consciously think of this as a hermit crab essay. In fact, I wasn’t really consciously thinking at all. But as I was unconsciously thinking, I decided to move the gigantic desk in my studio so that it faced a window. I pulled the desk away from the wall—and then I pulled my back.

It hurt – bad – so bad I couldn’t stand up straight. I crouched over my computer to ask the internet how to fix a torn muscle and WebMD gave me the answer: ice, an anti-inflammatory, elevation, protection. And then it came to me: Isn’t the heart a muscle too? I had found my form.

It’s true that a transgressive crush is a vulnerable subject to write about. But I didn’t seek a hard shell to protect that vulnerability. Instead I thought the contrast of form and content would serve the essay as a whole—a hot, passionate, messy subject encased by a cool, prescriptive, medical form.

Besides, aren’t all essays in some way vulnerable as we try (nous essayons) to express and explain what we think and how we feel—and why?

Armor protects, but it also limits your ability to see, to move, to flex, to adapt.
Better to hold an egg, a seed, an explosion.

Better to be the hand reaching out of the shell.

Look for Proximity’s next themed issue, REUSE, to go live within the week and find your way through our complex collection of true stories. And then perhaps find your way back again.

Randon Billings NobleRandon Billings Noble is an essayist. Her lyric essay chapbook Devotional was published by Red Bird in 2017, and her full-length collection Be with Me Always is forthcoming from the University of Nebraska Press in 2019. Her hermit crab essay “The Heart as a Torn Muscle,” originally published in Brevity, will appear in the anthology The Shell Game: Writers Play with Borrowed Forms, edited by Kim Adrian and out from the University of Nebraska Press in April. @randonnoble