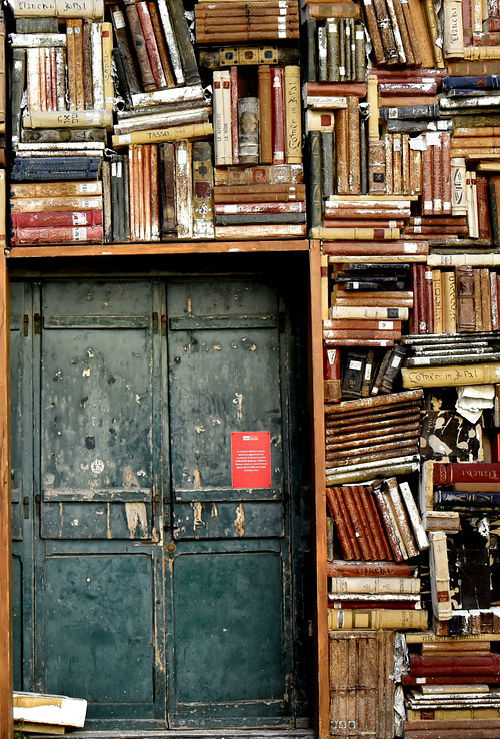 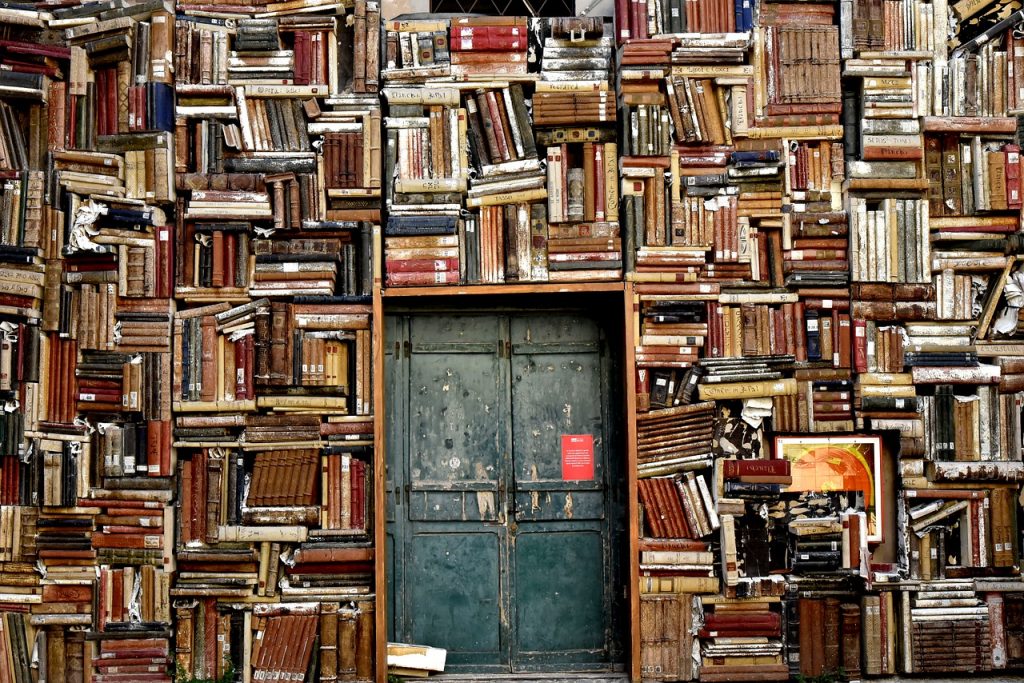 Like many, I had big plans for 2017. Lofty dreams, goals, and expectations, most of which have by now been shattered. But I remain hopeful about one thing: that I can meet my reading challenge for the year. This year, I want to read 52 books. (Yes, you did the math correctly… that’s one book per week.)

As if that weren’t a high enough bar for a person with a full-time job and a novel under revision, I decided that I would also write a review for each and every book I read. And the reviews have a special twist—each one is in the form of a haiku, a traditional Japanese poem consisting of 3 lines (the first and last lines of a haiku have 5 syllables and the middle line has 7 syllables).

To understand why I would aim to do such a thing, you must know that in 2016, I served as the Fiction Editor for Chicago Review of Books, an independent online literary review dedicated to diverse voices, settings, genres, and ideas. In that year, I read a total of 34 books and wrote 9 reviews published on the website. As my first foray into reviewing, I learned quickly that a 600+ word review can take many hours to write, edit, and polish. I loved the process of thinking critically about another person’s work, and as I work on edits for my own project, I’ve found that the experience has allowed me to better understand my own work from a critical perspective. But still, as 2017 dawned, I knew that I needed to take a break from writing comprehensive book reviews to allow me to read more books and to also finish my own work-in-progress.

So my #HaikuReviews were born, and the quick, painless reviews would be posted to my Instagram account upon finishing each book. Or so I thought.

The first surprise when moving from writing 600-word reviews to ones consisting of a mere 10-15 words was how incredibly difficult it was to say much of anything about a book in so few words. As a reviewer, I want to make sure that I share enough about the book to give context, but also add some level of critique to the mix as well. Doing so in a cohesive way in 17 syllables is like compiling a jigsaw puzzle whose pieces are all the same shade of blue.

For my first nonfiction #HaikuReview of the year, I read Carrie Brownstein’s Hunger Makes Me a Modern Girl. In the book, Brownstein spends much of the memoir reminiscing about her time in her band, Sleater-Kinney. Since I completely missed the indie rock and riot grrrrl scenes of the ‘90s (much to my sadness), the nostalgic nature of the book was lost on me. Still, I can appreciate learning more about anyone’s story, regardless of how familiar I am with the person, and so I wanted to like the book. I really wanted to like the book. But the book was too much of a patchwork quilt with pieces that didn’t seem to fit into the narrative, and long rabbit holes about her parents or her pets. 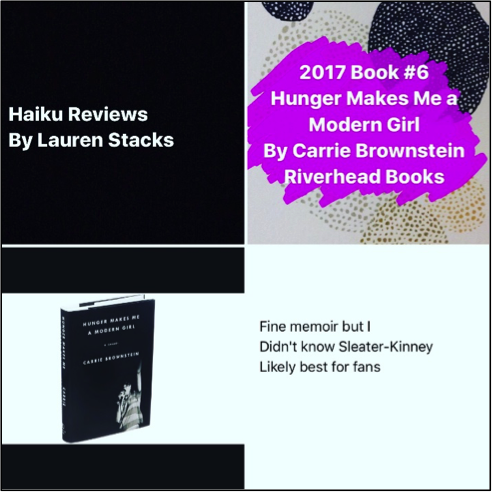 The trouble with critiquing a book is that there should be more to a review than just a gut reaction. There have been times when I have written a full-length review and found myself appreciating something about a book I initially didn’t like because I had forced myself to think critically about the book as a whole and not just my reaction to it. But this process is much harder during my haiku reviews. It would be easy to write a haiku about the first thing that comes to me, but instead I force myself to take a day or two (or quite a bit longer, honestly) to reflect on the book before tackling the review.

The other unexpected challenge was how awkward the 5-7- 5 structure is for trying to convey coherent information. I’ll admit that I have never been a prolific haiku poet in the past, and so it takes me numerous attempts to play around with word choices and sentence structure—not to mention obsessive double-checking of the number of syllables in words.

When reviewing Joan Didion’s memoir The Year of Magical Thinking, I whittled my critique down to a single sentence, essentially: This book is somehow able to make grief both terrible and lovely at the same time. But, as you can see, that sentence doesn’t fit the “rules” for a haiku, so I had to get creative with my arrangement of the words. 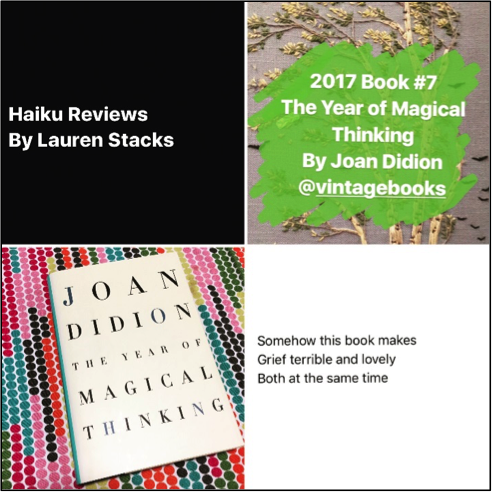 As I’ve continued to hone my haiku-writing skills, I’ve found ways to add some art and craft to the reviews. (Take, for instance, my review for Roxane Gay’s collection of essays, Bad Feminist.) I’m trying to remind myself to have fun while I’m at it! 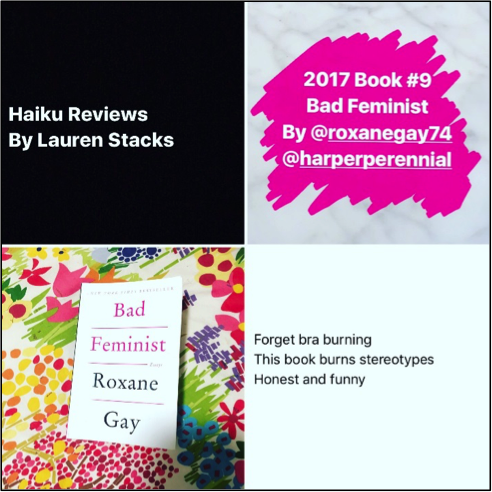 Five months into this year’s reading and reviewing challenge, I’ve been reminded that simply reviewing a book is extremely difficult, no matter the format or total word count. Even as I’ve stayed on track reading a book a week, I haven’t been able to publish a review each week for the amount of time it takes me to write, edit, and compile the post, much to my chagrin. But these #HaikuReviews are an idea that I’ve been tossing around for several years, so more than anything, I’m glad to be trying my hand at something new. After all, lofty goals are the basis of most successful projects, whether a self-imposed revision deadline for a book draft, a desire to write every single day, or a dream to see your project on stage or a big screen. And for me, this goal has forced me to consider each and every book I read this year with a critical eye. I’m hopeful this practice increases personal awareness for my own work-in-progress and allows me to practice self-criticism in my creative work.

Haiku reviews are
as hard as trying to choose
a favorite book.

Want to give #HaikuReviews a try? Send your mini reviews of a true story in any form (book, documentary, photo exhibit, anything!) to tovah@proximitymagazine.org and we’ll share our favorites. 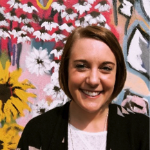 Lauren Stacks is a writer, novelist, and reader living in San Francisco. She holds a MFA in creative writing from Roosevelt University. Her work has appeared in Chicago Review of Books, Grand Rapids Magazine, Grand Rapids Family Magazine, and in Time You Let Me In: 25 Poets Under 25, an anthology published by HarperCollins. She is a recipient of a Luminarts Fellowship.